Please note. Some pages are currently available in English only. 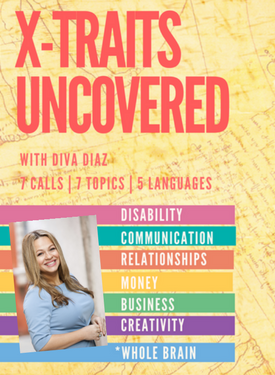 What would it be like to learn the language of Access X-Men and see the world through their lens of infinite possibilities?

The Access X-Men have brilliant abilities in lots of different areas that can sometimes go unnoticed, or even be hidden away for years. Is it time to discover what those capacities are? What would it be like to learn the language of Access X-Men and see the world through their lens of infinite possibilities?

This 7-Part series with Diva Diaz covers the following topics:

Purchase the English version here and email shop@accessconsciousness.com with your purchase receipt or confirmation email to request the downloads in one of these languages:

Shop support will email the translated files to you.

Upon ordering the English version, a delivery email with download instructions will be sent to you so that you may download your files.  If you log in prior to purchase you will also be able to access your downloads from your account dashboard.

For many years she travelled the world working and meeting with Heads of State, Ministers in Government and Blue Chip CEOs in Africa, Eastern Europe, the Middle East, Asia and Latin America. However, despite what looked like success on the outside, there was always a sense of stress, failure, not being good enough and exhaustion that she could not seem to shake. She noticed this in her peers and work environment too and could not understand why a large number of the people with whom she met and worked, who had what seemed like the ideal life, were also for the most part unhappy.

This fuelled her search for a way to have as full a life as possible, one that included happiness, ease, creativity, business, money and anything else that was joyful and contributive both to her and the world.

Having grown up in London, England, with Colombian parents and a mum who surrounded herself with books of all kinds, she had access to a lot of information that inspired her already inquisitive nature.  Since she was old enough to stand on a stool and reach the bookshelves in the living room of her childhood home (aged 7), she spent most of her free time seeking, studying, reading and learning about every fascinating technique and modality she could get her hands on.

When she came across Access Consciousness® she instantly recognised that what it offers is what she had been looking for: pragmatic tools that work, empower you to know, and create the change that is truly possible in the world.

She continues to globe trot while working with Access Consciousness® and facilitating classes and workshops on what she practices daily in life and business.

This site uses cookies. By continuing to browse the site you are agreeing to our use of cookies. Find out more.

IMPORTANT!
We do NOT track your IP address or use analytics, pixels or cookies for retarget advertising. If you like us, just come back and visit us online again!